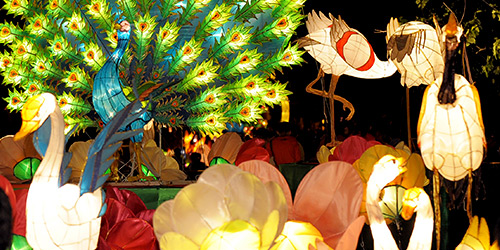 Finding love abroad was not in her plan ...
but Jasmine soon found her life drastically altered by
one chance meeting, one night in Hong Kong.

We met on the night of the annual Chinese celebration known as the Mid-Autumn Festival. I was standing outside a metro station, and I could feel somebody watching me. I glanced over to where I could feel the attention coming from and saw him standing alone, staring in my direction. I was intrigued but also shy, so I drew my attention back to my friends. As the others arrived, we set off to make our way to the festival celebrations. Before we could get far, I felt a tap on my shoulder. Startled, I turned around to see him standing behind me.

Our first conversation lasted just a moment - my friends were ready to go, and the busyness of festivities surrounded us. We gathered basic information from each other; our names, where we were from, why we were in Hong Kong, and how long we were both in the city. His name was Greg.

I remember the shakiness in his voice. I had recently been dealing with a pretty arrogant guy, so it was refreshing to be approached by someone who didn’t feel over-confident about himself. It was this that led me to give him my number.

I remember the shakiness of his voice ... it was refreshing to be approached by someone who didn’t feel over-confident about himself.

I feel like after that night of the meeting, everything seemed incredibly synchronized, and without being cliche (while loving the cliche) - it was meant to be. Later in the evening, I went home and opened my Whatsapp to remind myself of what he looked like. He messaged me at that exact moment. It was probably just a coincidence, but I tend to see things like this as signs, and I was confident that we had potential.

During the first month of our meeting, I already had several trips abroad planned, so our face-to-face meetings were somewhat spread out. However, soon after, Greg asked me to be his girlfriend and our time together in Hong Kong was filled with constant excitement and discovery. We quickly began spending most nights of the week meeting for dinner and discovering Hong Kong’s streets at night. Together, we visited and experienced almost everything the city had to offer. Each weekend we enjoyed incredible food, hiked tropical forests, visited local islands, learnt about the culture, and indulged in the city’s nightlife. ...  the magic of constantly discovering new things isn’t so prevalent.  I have been concerned at times that this may have been a vital part of what made our relationship so great to begin with

Greg had just moved there for work, and I was there for the third year of my university degree, so we didn’t have to consider the concept of a long-distance relationship for a pretty long time. It wasn’t until we were at a horse race (a Hong Kong must-do) speaking with another expat who raised the question of ‘what will you do when she has to return to England’. Knowing myself and speaking with Greg, it was established that long distance was not something that would have worked for either of us, so it was more than a relief when Greg revealed that he had already considered this and was more than happy to leave Hong Kong and move to the UK to be with me while I completed the final year of my degree.

Now back in the UK, our relationship is still very strong. However, there have been some changes. Not only is the weather considerably miserable in comparison to Hong Kong’s tropical climate, but it’s also extremely expensive. The opportunities for adventure are abysmal compared to where we met. This has impacted how we spend our time together as the magic of constantly discovering new things isn’t so prevalent. At times, I have been concerned that this may have been a vital part of what made our relationship so great to begin with ...

I think one of the biggest lessons I have learnt from finding love abroad is that you never know when and where your life can be drastically altered.

The idea of falling in love and having a healthy relationship with someone you meet in your third year abroad seems like something from a ridiculously unrealistic rom-com. For it to actually happen is almost unbelievable.

In many ways, our meeting could have been interpreted as convenient. We had both just arrived in the country and didn’t know many people. But I think meeting someone in a foreign country in a similar situation as you - who you feel like you can be totally yourself with - is something more special and in a way, I had never experienced before. Follow Jasmine and her story of Finding Love Abroad ...