‘Thank You for Being So Kind’ by Sarra A. | Inspiring Story #59 - Daily Inspired Life 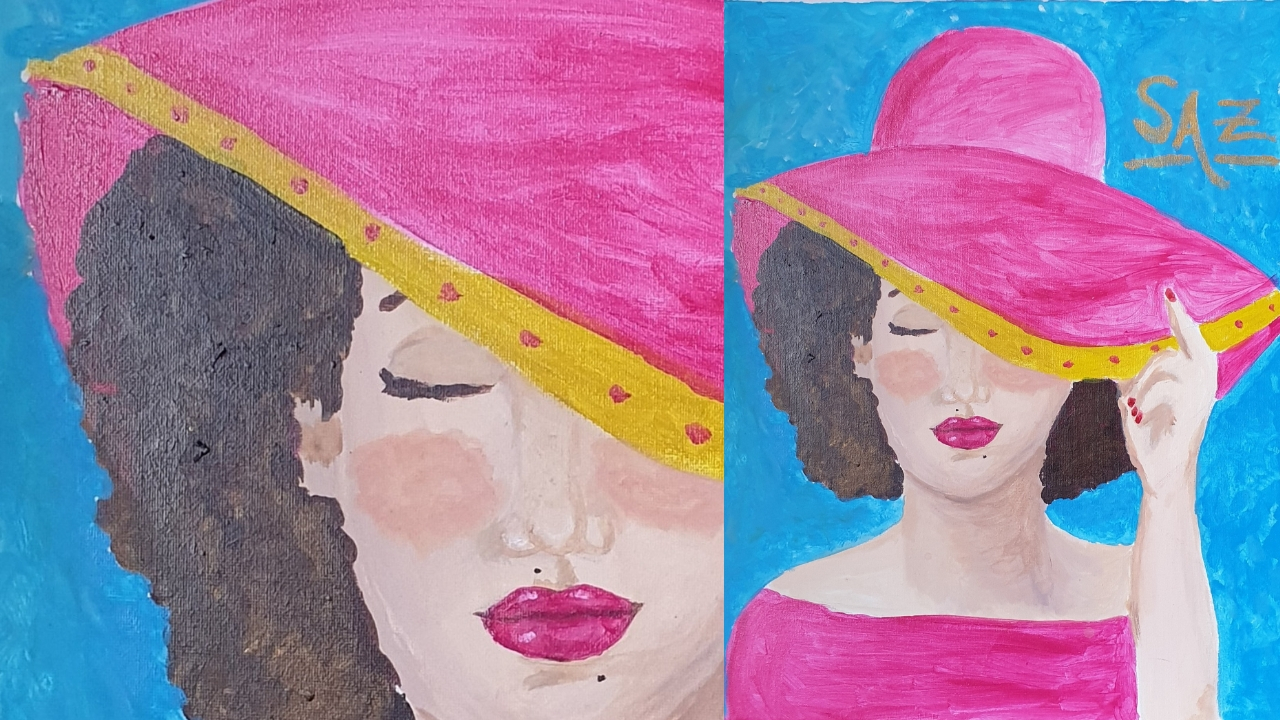 An early self portrait by the author Sarra A.

A short story about showing kindness to strangers.

Be taken into the mind of thirteen year old Sarra as she travels alone, back to her home in Kuwait.   Along the way she meets an old man and learns the wonder of showing kindness to  strangers ...

I had a long trip ahead of me. Three and a half hours from Lancashire to Birmingham, then another three and a half to London, Victoria … then a quick ride to Heathrow airport … and another six hours of flying to Kuwait, all back to back.

My aunt made me sandwiches for the road. They would keep me going until I reached the airport. She was sweet enough to put in two packets of sour cream and onion crisps and two small bottles of Ribena for me. She really did know what I like.

Sitting down at the station waiting to get on the coach, I tried to look as adult-like as possible. I picked up my Roald Dahl book, crossed my legs and started flipping through the pages.

“The BFG … Not very grown-up.” I closed the book and put it back in my backpack. I was used to travelling alone since I was a lot younger, but a certain level of grownup behavior was expected at 13, right? I was a young lady now and required no escort for travelling. I sat up straight as I folded my hands onto my lap … Yes, this was very grownup-like … I think. I adjusted my headphones and pressed play. The lyrics of Michael Jackson’s ‘Man in the Mirror’ flowed through and I hummed along …

“If you wanna make the world a better place, take a look at yourself then you make the change.”

As I got onto the coach, I was so thankful to find a window seat. That way I could lean my head against the glass and nap if I wanted to. But what if someone took my things while I slept? No. I was going to stay awake, like grownups do, and be responsible.

I placed my backpack in my lap and hugged it tightly, rocking myself back and forth while staring out the window, mechanically nodding my head to the beats jamming through my headphones.

Out of the corner of my eye, I saw someone approach my seat. I looked up to see an old man with grey thinning hair looking at me while mouthing something inaudible …. Oh wait. Walkman is on. I pressed stop and looked at him … “Excuse me? Can I sit here?” His voice was deep and a bit raspy.

“Yes, of course!” He looked kind of nervous, or tired. I couldn’t tell the difference. I tried to make things less awkward by not looking at him as he sat down. He let out a sigh and relaxed a bit in his seat.

“Hi, I’m Sarra.” I said as I awkwardly gave him my right hand to shake.

“… George.” He blinked at me for a couple of seconds before accepting my hand.

At least he was friendly. So, this was not going to be an awkward three and a half hours, I hoped.

“So, are you headed to Birmingham or continuing somewhere else?”

His brow furrowed a bit as if in deep thought for a second. “Yes, Birmingham. I’m visiting my son and grandchildren.”

“Oh, how many? I was just visiting my grandfather in Lancashire.” YES! There was something we could talk about.

As George told me more about his son and grandchildren, and as I told him about my grandfather, siblings and family, we both seemed to relax. We learned more about each other. His life was very straight forward. He was born, he grew up, he married and had a family and now he had grandchildren to visit. He never left the country and rarely interacted with anyone who was not from his town.

By contrast, I was a third culture kid living in Kuwait, with parents from different backgrounds, surrounded by neighbours from various places and went to school with children from all around the world.

Listening to George gave me a sense of gratitude for companionship, age contrast notwithstanding. He was 70 something years old and I was 13. We must have been odd to look at; a girl on the cusp of womanhood, still seeing the world through immature eyes, and an old man with a whole life already lived. But they say age is just a number, right?

It’s our experiences that shape who we are, not how long we’ve been alive for …

It’s our experiences that shape who we are, not how long we’ve been alive for …

Our conversation was rudely interrupted by my growling stomach. “Oops! Sorry! Food time!” I patted my belly comically to hide my embarrassment.

I took out a sandwich. It was a cheese and turkey sandwich with crisp lettuce. The trip hadn’t wilted the leaves yet. I took a big bite, my taste buds - and growling stomach - forcing me to let out a sigh of contentment. I noticed George was looking at me eating.

“He must be hungry.”  I thought to myself as I chewed slower, hoping that my considerate chewing would be less offensive to him. It was midday after all. Yes, he probably was hungry. I mean, I could give him my other sandwich. I was going to eat at the airport or on the plane anyway.

“Would you eat with me?” I said as I handed him my second sandwich.

His face had an expression somewhere between disbelief and outright shock “No. No, I don’t want to eat your food. You will need that for your next coach.”

“No, I won’t. I will eat again on the plane. Plus, I don’t really like eating alone.” The determination on my face must have been very persuasive, because after a moment’s hesitation, he nodded his head weakly and accepted the sandwich. I went to grab the second bottle of Ribena to give it to him and he must have read my mind somehow because I got a stern “No.” before I was able to say anything.

Something told me I should give up this battle. Did I offend him by insisting that he eat with me? Did I try to act so much like an adult that I completely messed it up?

After what seemed like an eternity of silence, interrupted by the occasional chewing of turkey sandwich, I decided that I should nap. I had an hour to kill before we reached Birmingham. Endless thoughts of my failed generous gesture were running through my head as I rested it against the glass, but in the end the steady lull of the moving vehicle won, and I drifted off …

The sudden tap on my shoulder made me shoot up in my seat. It was George.

He told me we had reached Birmingham. I rubbed my eyes and managed a smile, mindful to speak with as minimal use of my lips as possible to avoid further incidents of embarrassment with sleepy-breath syndrome. “Nice to meet you, George. I hope you have a great time with your family.”

As I extended my hand for a final handshake, he not only took it, but cupped it in both his hands. He looked me directly in the eyes with what I could only describe as a deep sense of gratitude.

“Thank you for being so kind to me. Safe travels.”

He patted my hand gently and with a curt nod, he turned around to get off the bus. I didn’t even get a chance to say anything back. Not that I knew what to say …

I slumped in my seat with my mind computing what had happened. He wasn’t offended that I insisted he share my food. He was shocked. It dawned on me that this man had probably never been offered food, or anything for that matter, by a stranger.  It was an epiphany for me ...

Sharing food came naturally to me.   And I'd  shown this old man kindness without meaning to. I don’t know what he walked away with that day, but I walked away with a sense of fulfillment that I did not quite understand. His words, “Thank you for being so kind to me” kept ringing in my ears and I kept smiling to myself.

If I felt this good because I made someone’s day by complete accident, I wonder how wonderful it would feel to show strangers kindness with intention.

His words, “Thank you for being so kind to me” kept ringing in my ears

“Are you getting off here, love?” The conductor’s voice brought me back to reality.

“Uh, yeah, thank you. I have another coach to catch to London Victoria.” I quickly scrambled to my feet, slinging my backpack across and my headphones over my ears. Ironic, that the song playing was ‘Man in the Mirror’ by Michael Jackson. As I stepped off the coach, I sang along …

“If you wanna make the world a better place, take a look at yourself then you make the change.”