In desperate times people can be driven to take desperate measures...

In this story, Malcolm, an elite security officer challenges us to look beyond outward appearances to see the son, the father and the human story behind the crime.

Travelling on the train seemed to be a new experience for me. I somehow looked at people differently now. Curious, I people watched from my window seat looking at their facial expressions, body language, and behaviour. I wondered what drama people were experiencing in their lives.

As an ex-military man and years working on an elite security team, I’d seen my approach and attitude toward people change. I was less judgmental, not so forceful, calmer, and more collected when facing dangerous situations.  I no longer looked at criminals with hatred and disgust.  Instead, I wondered curiously what situation propelled them toward a life of crime and how utterly desperate and lost they must be feeling.

Like the ‘machete man’, I’d come face-to-face with that morning…

I was less judgmental, not so forceful, calmer, and more collected ...

After detaining three individuals for petty theft, I was taking my lunch break, when Tanya called in an emergency to evacuate the building. After some quick communication, I was horrified to hear the reason why. There was a six-foot-four male in the lingerie section with a machete.  Customers were fleeing the store in a panic.

Entering the area, I reached for my radio. “Charley, one approaching the second floor by the escalator. Put the cameras on me as I am about to approach the male.” Turning my radio to the almost off position as the radio went crazy with voices, I approached the male.  I moved in closer until I was about eight foot away from him.

He wore a long dark jacket down to his knees and had long black dreadlocks. He was of large stature and looked heavily medicated or on drugs.  I asked him to stay calm and tell me his name. He looked at me speechless. I told him that there were people frightened who needed to exit the store, and that I wanted him to slowly put the machete on the floor and step away from it.

I told him I meant him no harm and that if he put this weapon down, he could leave the store through the exit behind him, which lead to the second floor of the shopping centre.

Customers were fleeing the store in a panic...

To my amazement, he did follow my instructions.  He placed the machete on the floor, stood upright, took a final look at me, then turned to leave through the exit. Almost immediately, the three ladies in lingerie went hurrying toward the escalator. I gave a big sigh of relief as I looked at the weapon on the floor.

I turned up my radio, calling all call signs that the male was no longer in my store and had entered the shopping centre unarmed. I had the machete. Call Sign Charley One 165.  Now it would appear, he was no immediate threat to the public, but he still needed apprehending by the police, asking the CCTV room to check his movements until he could be detained.

I returned to the CCTV room.  Tanya was furious.  I tried to explain that elderly women were in imminent danger and I needed to act.  She was not prepared to listen to my explanation.  After an uncomfortable heated five-minute discussion, I resigned as head guard effective at once.  Tanya became silent as I handed her my radio and ID card.

Walking past dumbstruck guards and exiting the CCTV room I made my way to the escalators.  I threw on my jacket, taking one last look at the store.  I walked towards the front door, leaving, and not looking back.  I lit a cigarette as if it were a fat Cuban cigar and made my way through the city centre. Very shortly, I was on the train pulling out of Birmingham New Street Station, never to work in security again.

On the train I pressed my face against the cold window, wrapped in the stale smog of body odour and the paco rabbanne of a thousand commuters that had been in that seat before me. I felt relief, no one would be trying to kill me anymore, no more beatings at the hands of those I detained. But my mind was thinking about the machete man.  His eyes were lost, darker than the night of an eclipse. Medicated to dull his senses, either by self or by prescription. He is someone’s son I thought, lost in his own mind with a vocabulary no one understood.

The fleeing customers didn’t stop to see what I saw. Of course, they were frightened, just like the three ladies in lingerie. I know everyone was telling me to stand down, wait for armed response, but my instinct as a soldier just would not let me run the other way. It is a strange feeling running towards fear when the faces flying past you are terrified. I would have died that day for those ladies. I would have sacrificed myself to give them time to run. Am I a hero? No. I was simply born with the spirit and courage to stand up to people who would hurt others and say “No.”

It is a strange feeling running towards fear when the faces flying past you are terrified.

There are thousands of us, millions even, many of them walking in the street next to you as you shop. Many sadly died on the beaches of Normandy and the fields of Afghanistan. They are my real heroes, those that gave their life, so we could have one. They were my brothers and sisters; my children and we are who we are because of them.

I honour and salute them. Me? I’m just Malc x

I'm a single dad of a 7-year-old mermaid and a 9-year-old Roblox champion.
I have written my memoir called "Call Sign Charley One". I now run a radio station called "Silent Voices Radio Station" where I invite authors, singers, and speakers on to be interviewed 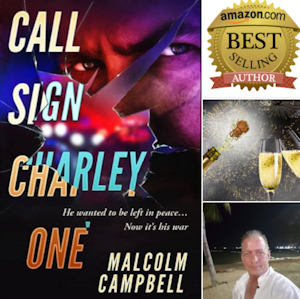 Woman of Iron & Lace, Power & Grace:  Soula, a woman who can carry a gun in one hand, while accepting a delicate rose in the other.  Soula was one of the first women sworn in as ...