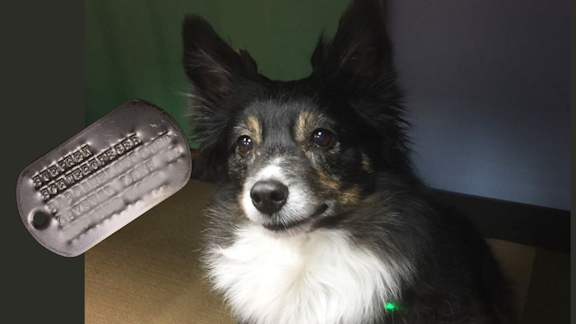 One afternoon Steve receives a phone-call from a boy saying he found a dog tag while hiking. Little did the boy know that this small gesture of kindness would make the big impression it did ...

With the bad news that’s been broadcast lately, it is very easy to overlook the fact that there are many decent kids out in the world today. I experienced a sterling example of the goodness that is still out there and am moved to share.  It was almost like being in a Hallmark movie.

Late this afternoon I received a phone call from a boy who was hiking in a nearby forest. This was the same forest I always walked my therapy dog, May.  The boy sounded a little nervous as he explained how he found a dog tag with my name and phone number laying in the grass. Without hesitating he agreed to leave it on one of the picnic tables so I could find it - no expectation at all from him.

I asked the boy if he could wait a few minutes, because I would like to give him a little something as a reward for calling me. He said, “Okay.”  I drove straight to the picnic area.

When I pulled in, the boy was waiting with his younger brother and cousin.  All three kids looked about twelve years or younger.  I introduced myself and asked if they were the ones who found a tag.  They all acknowledged me and presented a dog tag that May had once worn on her collar.   I was emotionally floored as soon as I laid eyes on it.

They started explaining how they found the tag in the grass and called me because of the phone number on it.  I sat down at a bench with them and explained how my dog May wore this tag and had lost it in this very same area after being bitten by a snake.  All kinds of questions started flying and, in the discussion, I told them how May died. The kids all got up and without question, one-by-one they gave me a hug saying how sorry they were because my dog had died.

They asked me what May was like. I shared more stories about May and how she was a therapy dog for 10 years.  In turn, the kids told me about their pets at home.  It was a really nice time.  These three kids on their own, no parental prompting called a complete stranger because they found a tag that my dog had worn about a year ago. What a great example of doing the right thing.

And oh yes, I did give them a reward even though they did not seem to be expecting it.  I decided to contact the local newspaper and tell them about this.  I hoped they would write something showcasing the positive thing those kids did for me that day.   And they did!